Note:  The following is from an article written by Mildred Staley, Post-Register Correspondent

Charles Otto Jernberg born June 21, 1865 (note from Kim: his birthdate is actually September 16, 1867) in Sweden came to Chicago as a young man to work as a finishing carpenter for the railroad.  While there he met Mary Elizabeth Erickson (Eriksson) who had also been born in Sweden on September 16, 1867 (note from Kim: her birthdate is June 21, 1865).  They were married in 1888.  Four children were born to them while in Chicago, Edward, Elmer Emanuel, George, and David R.  Charlie, a finishing carpenter for the railroad, had been transferred to Pocatello from Chicago in 1900.  Roy was born in Pocatello in 1902. 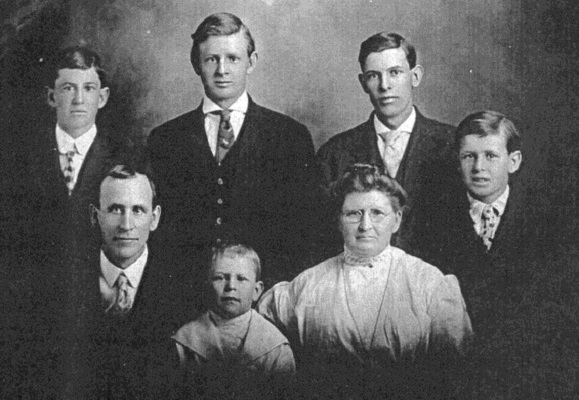 Charlie wanted to find a place where his sons could grow up on a farm. Charlie Nordstrom and Eric Palmgreen, also Swedish immigrants working for the railroad, had the same idea and liked the new land being developed in Mud Lake, so in 1912 they came to Mud Lake and filed on homesteads.  The Jernberg homestead is 3 1/2 miles north and 1/2 mile east of Mud Lake.  Elmer had left home earlier and George and Ed were working in Pocatello, but Roy and his brother Dave moved to Mud Lake with their mother to help prove up on the land.

In 1938 the Jernbergs were one of the few early Mud Lake settlers who qualified to celebrate a golden wedding anniversary.  Charlie died the following spring Feb. 21, 1939.  Mary, however, lived until Sept. 7, 1964 at which time she was the second oldest woman living in the state of Idaho. 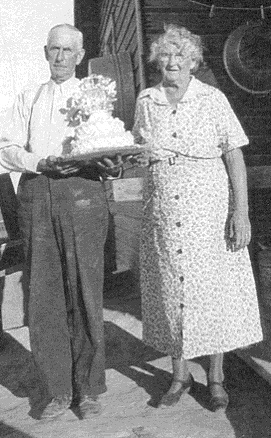 The Jernbergs saw many changes over the years.

They lived in a tent until their father and brother, Ed, also a carpenter, were able to build the two room house which became a nucleus for the modern home still in use on that farm.

Dave was fifteen at that time and Roy only ten but they grew up fast with the responsibilities of pioneering.  Their father continued to work in Pocatello to help support the farm.  Dave worked full time but Roy attended the local one-room school by the lake until it was condemned because of high water.  He later attended the Wagoner school north of their farm for one year.  After he was in the eighth grade he and his mother moved back to Pocatello each winter until he graduated from high school.

In the summers he helped on the farm.  In 1912 there were no roads, no stores, no post office, few neighbors and poor communication.  He used to use binoculars to see what the neighbors were doing, something made possible by the lack of trees.

Three years later the settlers agreed they needed to establish a post office.  To do so they had to operate it free for six months.  One neighbor contributed a horse, another a buggy and Roy at age thirteen served as mailman driving to (Roberts-Hamer) Owsley, Doc Glen, Jim Potter two times a week.  Another neighbor, Mary Welchman served as postmaster.  The name selected for the new post office was Level, an appropriate name for a community established in the middle of an ancient lake bed.

While the land was comparatively level and the soil deep and productive, water cycles caused a continual problem.  There was flooding when the lake was high and serious drought when it was low.

The Jernbergs helped develop one of the early irrigation systems in an effort to provide a balanced water supply.  Charlie was one of the founders of the Jefferson Canal Company.  Elmer served as secretary for some time and Roy was president of the company from 1925 to 1951 when they moved to Idaho Falls.

Ed died in 1919 and Elmer and George were farming separately by 1921.  Their father was still working in Pocatello and Dave and Roy continued to operate the farm as a family business.  The operation changed from the beginning when they harvested hay with pitchforks, a jay hawk stacker and bull rakes to derricks and slips and finally to modern balers.

A number of changes came in 1929.  They had purchased a bunch of feeder steers in the fall at what they thought was a good price, but prices dropped with the beginning of the depression.  After feeding them all winter they had to sell them in the spring for much less than they had paid for them.

That was also the year when Dave married Cleo Dunn, a local school teacher and the brothers divided the property with Roy taking the land and Dave the livestock and pasture.