Charles Edward Walfrid Jernberg, a.k.a., Ed Jernberg, son of Charles and Mary Jernberg, died on April 20, 1919 of a tragic and suspicious death at the age of 30.  Ed's death was a devastating and heart wrenching event that forever changed the lives of the Jernberg family.

Included in this article are his death certificate and three newspaper articles related to his death.

1.  The first article was published in the Pocatello Tribune on April 21, 1919, which is the day after Ed died.  It details the strange events that led up to Ed being found unconscious and bleeding in an alley, as well as the massive neglect by multiple people over the course of 8 plus hours leading up to his death.

2.  The second article was published in the Pocatello Tribune on April 22, 1919.  It reports the findings of the Jury Inquest into Edwards Death as being "death by a fracture of the skull and by a blood clot on the brain by some cause unknown".

3.  Almost 3 years later, on January 20, 1922 the Pocatello Tribune published a third article on Ed's death.  They report "considerable mystery surrounds the death of Edward Jernberg on the morning of April 19th, 1920" (the actual date was April 20, 1919).  Some details in the third article conflict with details reported in the first article.

There are many parts to this first story that really don't make sense, even when you take into account the date on which this all occurred.  It states around 2 am on April 20th 1919, Ed Jernberg was seen by a taxi company manager and one of his drivers arguing with two other guys and they all went down an alley.  About 30 minutes later two "well-known Pocatello boys" found Ed in the alley unconscious and bleeding from a "cut on the lip".  (Obvious it wasn't from a cut on his lip because later the amount of blood on the ground where he was found caused them to say they determined he had hit his head on a rock or the pavement and then was dragged to the rear of a store.)  Out of the blue a "call boy"  (either a bell hop or the male version of a call girl) shows up and finds a card in Ed's pocket that, according to the call boy, says the unconscious and bleeding man's name is Jorgenson and he lives at a rooming house.

At the direction of the taxi company manager, unconscious and bleeding Ed was driven in a taxi to a rooming house along with a second taxi driver and the two "well-known Pocatello boys" who found Ed. (Why was there a second taxi driver and why did the two guys who found an unconscious stranger go with them all in the taxi to the rooming house?) And of course, the rooming manager says that man doesn't live there and his name is not Jorgenson.  It then gets even stranger because next the two cab drivers take off and leave the three men - Ed and the two guys who found him - at the rooming house even though the manager told them Ed didn't belong there.  They told their taxi company manager they left the three guys behind because they were were "intoxicated" and would not pay the cab fare (even though the entire time Ed was unconscious).  The rooming house manager is upset the men were left behind and calls the police.  At this point the taxi company manager goes to the rooming house and meets up with two policeman who end up there - Officer Hamlin and Night Chief George Smith.

The taxi company manager basically said he had seen plenty of drunk guys and it was clear that Ed was just "stupiefied" from alcohol.  So, Ed is driven by the taxi company manager and one of the policemen in a taxi (where was the police car?) to the jail.  They put Ed on a cot in the women's ward in an unlocked cell with an older guy who was given "sleeping accommodations" for the night.  (Seriously?)  The next morning after 9 a.m. while STILL UNCONSCIOUS, Ed began to throw up, so the desk sergeant "sought to get medical aid" but Ed died before medical aid could be administered - at 10 am.  (Why did id take over an hour to "seek medical aid"?!?).  The post mortem examination conducted on the 20th "disclosed the fact that an occipital skull fracture causing hemorrhage of the brain was the cause of death".

Edward Jernberg officially died from a fractured skull causing a brain hemorrhage.  But, Ed Jernberg actually died from suspicious circumstances, having his skull fractured and the resulting brain hemorrhage, being tossed into multiple vehicles (and probably roughly), driven around town by a bunch of idiots who KNEW he'd been attacked, then left unattended in a jail cell instead of being taken to a hospital - all of this while unconscious and bleeding for well over 8 hours! 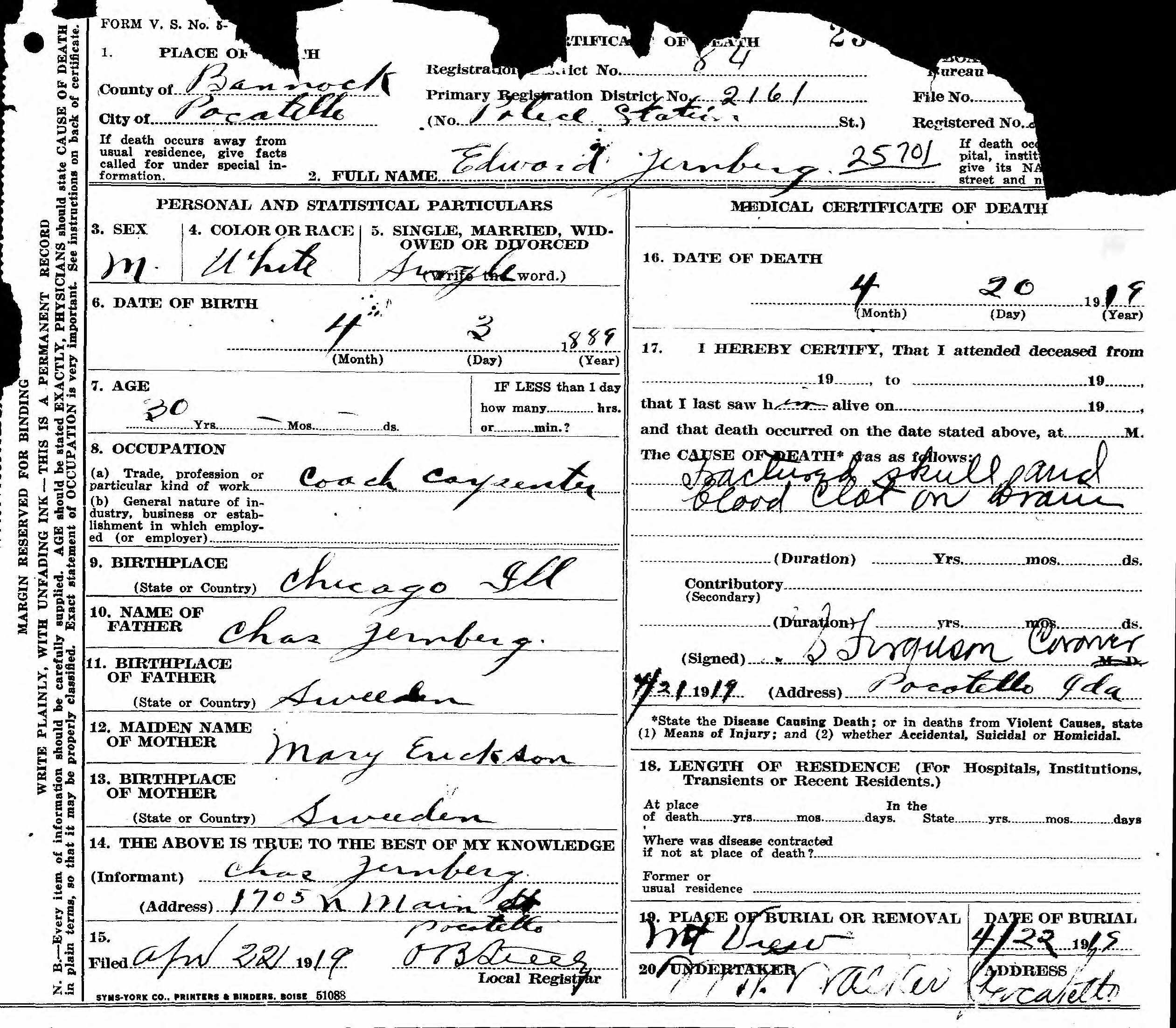 April 22, 1919 - Jury Finishes The Inquest:  Exact Cause of Death of Edward Jernberg, Following Quarrel, Not Determined in Evidence

The corner held an inquest into Ed's death at the funeral home.  There were 10 men on the jury in addition to County Attorney I.E. McDougall and the County Coroner S. S. Ferguson.  Supposedly a number of witnesses were "examined" and the inquest continued over the greater part of the afternoon.  They jury "brought in a verdict that the young man came to his death by a fracture of the skull and by a blood clot on the brain by some cause unknown to the jurors".  (Yet, multiple people saw Ed and the two guys argue, go into an alley, one of the guys was seen running away from the alley, and Ed was found in the alley unconscious and bleeding!  And then there is the massive neglect and stupidity that followed by all involved.  Even in 1919 how can they say by "some cause unknown"???)

The final article about Ed death reports that "considerable mystery surrounds the death of Edward Jernberg".  At the beginning of the article they say he died on April 19, 1920, at the end of the article they say the date was April 18, 1919, yet the actual date was April 20, 1919.  (But hey, why expect accuracy in newspaper articles, right?)  This article repeats some of the same details reported in the first article on April 21, 1919, but some of the details conflict with those reported in the first article.

-  The 1919 article says Ed and his brother Elmer left home around 7:30 pm, they met up with a 3rd guy Elmer didn't know, and partied together until around 1:15 am when Elmer met up with another brother Roy at a diner to eat.  After eating, Roy, Elmer, and Edward all met together and started to walk home when Ed decided to go back up town.  The 1922 article says Ed and Elmer left home together, spent the greater part of the evening together, met with the 3rd party and the trio "chummed around for an hour or so".

-  The 1919 article says Ed and two other guys were seen arguing around 2 am and Ed was found unconscious and bleeding around 2:30 a.m., but the 1922 article says the argument was around midnight.

-  The 1922 article never mentions the "call boy", the fact that the two guys who found Ed rode in the taxi with him to the rooming house, nor does it mention the decisions made by and the involvement of the taxi company manager Sam Garbett, taxi driver Lee Wilson, taxi driver "Frenchy", Officer Hamlin, and Night Chief George Smith.

Occipital bone skull fractures are SEVERE head injuries.  They are uncommon injuries usually resulting from HIGH-ENERGY blunt trauma. They occur most commonly from motor vehicle collisions or a fall from significant height.  They uncommonly occur from pedestrian trauma or from assault.

- bleeding from the wound, near the wound, or around the eyes, ears, and nose

- bruising near the wound, under the eyes, or behind the ears,

- swelling at the point of impact

- redness or warmth at the point of impact

The prognosis for or a brain hemorrhage that occurs due to a traumatic brain injury may be poor, especially when the injury results in unconsciousness, but waiting more than 8 hours to get help for an unconscious and bleeding man known to have been attacked in an alley is plain and simple neglect - even in 1919.