The theme of the Mud Lake Fair and Rodeo parade held Saturday, August 14, was the "Good Old Days".  Dave Jernberg, who was selected as the parade's Grand Marshal, can remember the good old days, but he recalls they were't always so good.

He grew up in Pocatello and attended school there.  His father, Charlie Jernberg, a shop foreman for the railroad, heard of the land available in the Mud Lake area and in the spring of 1912 he filed on a 160 acre homestead there.

Dave said, "There weren't many real farmers who settled in Mud Lake.  Most of them didn't think the land out here was worth bothering with."  His recalled his father was a carpenter by trade.  (A lot of their neighbors were miners and there were a lot of other trades represented among the early settlers, including brick-masons, butchers, bakers, surveyors, teamsters, etc.)  Two things everyone who settled here had in common were a desire to own land and the determination to work for it.

Dave had just graduated from the eighth grade and he and his mother moved out to prove up[1]  on the homestead.  They came out with what they could haul in a wagon with a white top buggy towed behind.  “It was a big load for the horses.”  One place in particular was the road between Fort Hall and Blackfoot which was just loose deep sand.  He said, "That was hard on horses and bad to drive through."

Lived In a Tent

When they first moved out they lived in a tent, but as soon as possible his dad and his older brother, Ed, came out and built a two room house with a cellar under it.  They didn't have many neighbors at first.  He remembers on the way out they stopped at a log house where they met the Staley family, who had moved out shortly before they did.  Other neighbors were the Nordstroms, the Abbotts, and Eric Palmgreen.

Dave said, "I guess of all the people we met when we first moved out, the only ones left are Roy Staley and Cora Miller."

Dave and his mother remained on the farm and his brother Roy, who was still attending school, came out for the summers.  Roy returned to Pocatello in the winter until he graduated from high school, after which he got married and he moved out to the homestead with his wife.

He said they helped build the Jefferson Canal Co. ditch in 1913 using slip scrapers and fresnos, but were not able to begin irrigating crops until the following year.

One experience he has never forgotten was in 1913.  His father had filed on a desert claim in addition to the homestead.  One time he came to the farm and he and Eric Palmgreen set out on foot to check the desert claims.  Palmgreen wanted to look at something in another area and Charles Jernberg decided to return to the ranch, but became lost in the tall sagebrush.

When Palmgreen returned and found him missing, the family searched for him and later all of the neighbors joined in the search.  They built huge bonfires at night hoping he would see them. Jernberg continued to walk in circles in the high sagebrush in the hot desert country for three days without food or water.

He had given up hope of getting home alive and had written a note which he placed in the back of his railroad watch.  He feared that after his death the wild animals might destroy his body and clothing, but he knew if his watch was found the family would at least have that note.

After three days of wandering he came to a ditch on the Reno ranch about fifteen miles from where he had started.  A hired man found him and Frankie Reno returned him alive and well to his worried family.

Farming was not easy in those days, Jernbeg said.  They planted grain in 1913 and alfalfa in 1914.  At first they stacked hay with a Jay Hawk stacker and later used a derrick with slings.  It took seven men to put up the hay and his mother was kept busy cooking for the crews.

Dave said he always had more interest in stock than in farming, but he had some hard experiences getting started in the cattle business.

In 1919 the family bought a herd of cattle from a man near Pocatello for $50 a head and half of the calves.  They rounded up the herd and put them in the stockyards for the night but during the night the cattle got out and were put in the stray pens.  After getting the herd back to Mud Lake they fed them out for the winter.  But that was just at the time of the post war depression.  In the spring they had to sell their calves for  $27 a head.

They still didn't lose interest in getting a herd of cattle and later bought some from Frank Jackett in Mud Lake.  They succeeded in building up a pretty good herd, and in 1929 heDave and his brother Roy bought a bunch of feeder cattle for what they thought was a good price.  Again, they had bought at the wrong time.  In the spring, after feeding them all winter, they had to sell for a heavy loss, victims of the Great Depression.

That was also the time when Dave and a local school teacher, Cleo Dunn, and married her.  The newlyweds started off with a large debt.  Dave said, "We had trouble paying it off.  In fact we didn't get it all paid off until we had a good crop of alfalfa seed ten years later." 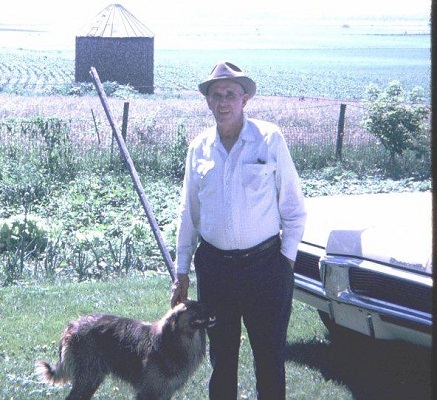 In spite of all the setbacks, Dave has continued to raise cattle.  For 18 years he trailed his herd to Medicine Lodge each spring for summer pasture and trailed them back in the fall.  Then, after they were on the ranch the cattle to be sold were trailed to the railroad depot at Hamer, and from there they were shipped to market.  Most of the time they were shipped to Ogden or Omaha but sometimes they were shipped to Los Angeles.  He or his brother Roy had to go with the herd on the train and he said they generally rode in the caboose when they weren't checking on the cattle.

He doesn't remember when the stockyard was first established in Idaho Falls but said that has been a big help to local stockmen.  Also, he said if they had been able to truck the cattle instead of trailing them it would have helped a lot.  He recalled the cattle were always foot sore for two or three weeks after each trip.

After Dave semi-retired, he still owned a herd of cattle which he leased to his son, although he sold the land.  In the winter he and his wife moved to Phoenix, Arizona, but in the summer Dave still helped with the cattle.  He quit riding a horse but rode the fences in a jeep to keep an eye on the stock.

He used his expertise in helping with the beef department of the Mud Lake Fair.  He was the first beef chairman and served in that capacity for 26 years. 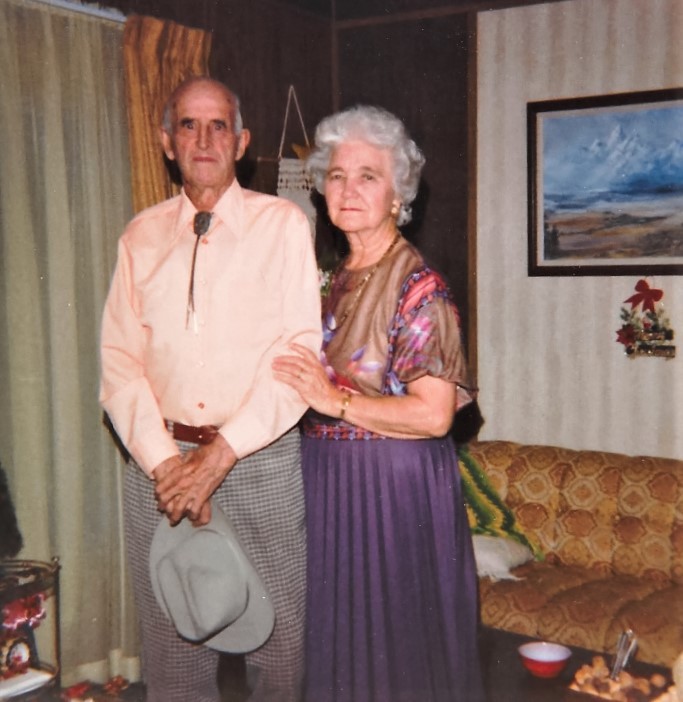 [1] The Homestead Act of 1862 was signed into law by Abraham Lincoln after the secession of southern states. This act turned over vast amounts of public domain to private citizens. 10% of the area of the United States was claimed and settled under this act.

A homesteader had to be the head of a household or at least 21 years of age to claim a 160 acre parcel of land. Farmers from the east without land of their own, single women, and formerly enslaved people worked to "prove up" and keep the free land.

"Proving Up": Each homesteader had to live on the land, build a home, make improvements, and farm for 5 years to be eligible to "prove up". After all the requirements were met, the homesteader found 2 neighbors or friends willing to vouch for the truth of his or her statements about the improvements they had made on the land and sign the "proof" document. After the homesteader paid a filing fee (of either $6 or $18) they received a patent for the land, signed with the name of the current President of the United States.